Produced, Directed and Edited by Dustin and Evan Bozarth of AIRSHP

Umphrey’s McGee was in need of some big league shoop skills – so they called in the southpaw – EBOZ!  See more in the portfolio… 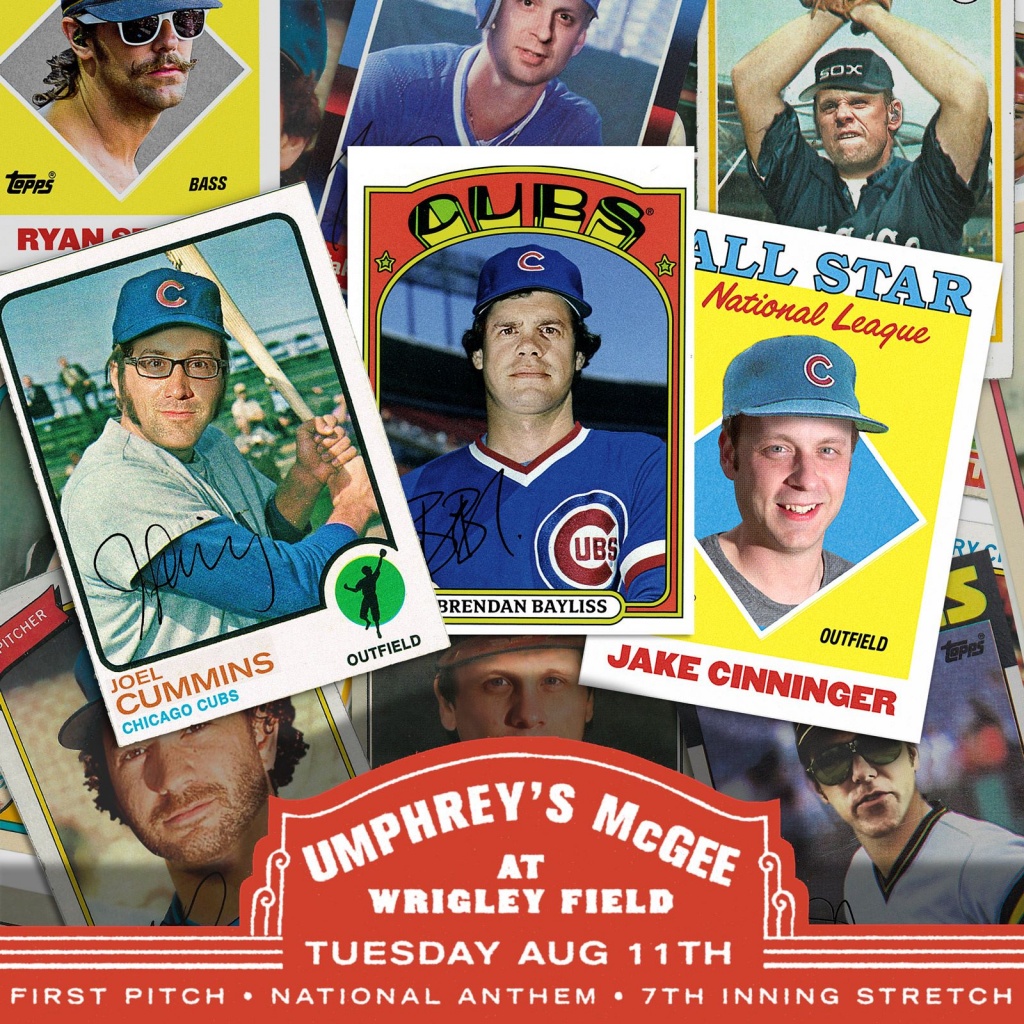 “A few of the lesser known quality acquisitions made by the Chicago Cubs before this year’s trade deadline. Come join us at Wrigley Field on August 11th for the UM Trifecta.”
Posted by Umphrey’s McGee on Wednesday, August 5, 2015

We shot this on-location at Wakarusa… The audio was a challenge – We had wireless lavalier mics on the 3 band members – the sax player was in 1 pod with Evan – he had headphones on so he could hear the other guys. Evan was manning the audio recording rig and getting extra footage with his iPhone. The other 2 dudes were in the pod with me, 2 mounted goPro’s, and a Canon t2i handheld.

We’ve been inspired by the Take Away Show series and have been trying to bring a little bit of that guerilla flavor to these Moon Tune videos for Phases of the Moon Festival. Still learning, but this was a fun experiment. Good times.

Announcing the release of Phases of the Moon Music & Art Festival‘s inaugural lineup film.. “One Small Step for Jam…”! BIG thanks to our friends Aaron Weiss (of One Story Productions) and Slate Systems, who collaborated with AIRSHP on this stop-motion film. We like to think of it as a nod to the Apollo 11 moon landing mission, a tribute to the spirit of exploration in all forms of art, and our own little Lunar Landing Conspiracy! 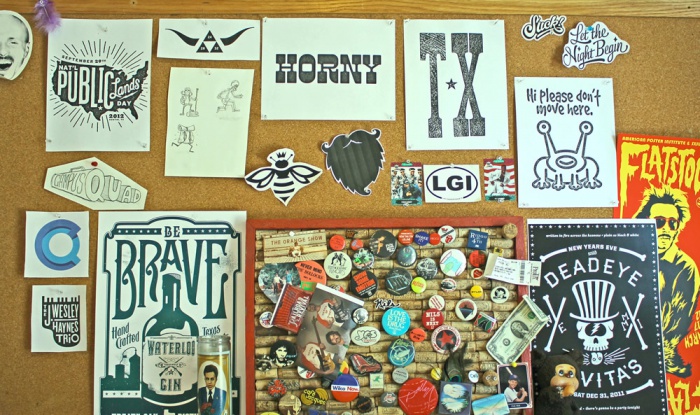 Thought i’d post a shot of my office bulletin board to shed some light on our recent work…As you can tell, we’ve been really busy lately.

In no particular order- you’ll see branding for J.Wesley Haynes Trio, in-progress branding for a new iOS app called Campus Quad, more branding for Treaty Oak’s new Starlite Vodka, a charity t-shirt design for National Public Lands Day, various t-shirt designs for our new Austin clothing line ATXTEES, and tons more stuff.  My dad’s rock’n’roll button collection from the late 70’s, a memento from our trip to Gasparilla Island in Florida, my ticket stub from a Phish show in Oklahoma, Munchichi- an old stuffed animal rescued from grandma’s house in Atlanta, TX, some doodles for a survival blog, a sweet Flatstock poster by Bang! Media, among other things…

So that’s what we’ve been up to…What chu been doin?? 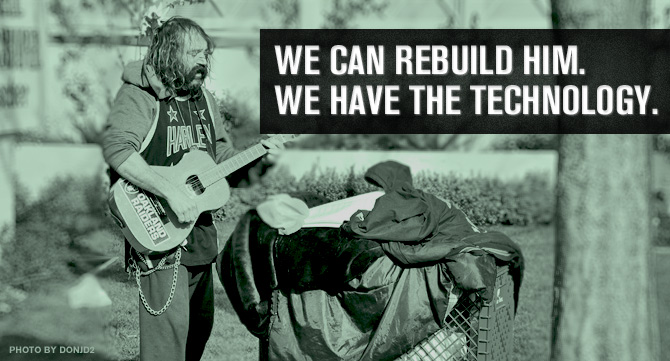 So…we’ve been kicking around this idea for a while, as one of our internal projects, as an outlet for our product design and branding skills. We all know online shopping in general is bigger than ever, but we are also aware of the insane competition in the industry, and we don’t wanna be just like everyone else…So the obvious question is, “How will our shop be different?”

Here’s some notes on the topic we scribbled over Gyro’s at Zorba’s.

So, we’ve already started production on a Shopify theme, and there’s no shortage of good product ideas.  Add that to our trial by fire (literally) experience creating the Central Texas Wildfire Relief T-Shirt campaign, and we feel this is a great concept and worthy experiment to try.  Got any advice? Product ideas? We’d love to hear from you.

I have been loving YQL ever since I figured out how to use it to scrape webpages and return the data as JSON – allowing you to turn any standard web-page into a simple API ..opening up endless possibilities for data mash-ups.. IMO, its the best thing Yahoo has ever produced!

I wrote a little jQuery plugin that uses YQL to convert an RSS feed into a handy JSON object – this tiny extension makes its easy to work on rss feed mashups and widgets.. just check out this instagram tag search or this gimmebar user feed that i made in a matter of minutes..

Ok.  This is really just a sketch or rough-draft of what’s to come…but…I made a quick montage of Chris Dye laying down basic tracks at Jimmy George’s new Roostudios in Manchaca, TX.  This footage will eventually be used in a finished music video or “brand film” for Dye4…enjoy!

OK, first off – What is user experience?  Here’s Wikipedia’s definition:

In short: UX reaches beyond the superficial facades of design and technology.  It taps into the psychology of interaction.

A great UX should be baked into all modern web-designs from their inception, which, of course, requires additional time/resources/money to achieve.

So, why should we invest in better UX? What’s the ROI?

Dr. Susan Weinschenk breaks it all down for you in this nifty little stop-motion video below.

Also, be sure to check out Dr. Weinschenk’s video on the 7 Principles that make websites more engaging.

We hope this message finds you well, the following is a primer for the uninitiated…

We’ve been around.
Although AIRSHP is new, as a 2-man team, we’ve been around the block a few times. We have a 12-plus year background doing quality design and development for the entertainment industry. We’ve spent most of our careers working for other firms and we’ve learned a ton along the way, but the day has finally come to set out on our own – to forge a company that is built from the ground up around us – our collective skills – our creative ideas – we’ve got something to say!

Who does what?
Dustin handles most of the development work and Evan handles the graphic design.. we share duties when it comes to creative and strategic services..

What kind of projects would you like to take on?
We prefer to take on projects that utilize our broad skill set – web design, logo, branding, internet marketing, social media strategy, user interface design, email newsletters, etc.. allowing the end result to communicate our clients’ message consistently and effectively across all mediums. Ya Dig? If so, we are actively seeking new projects to sink our teeth into.. holla. 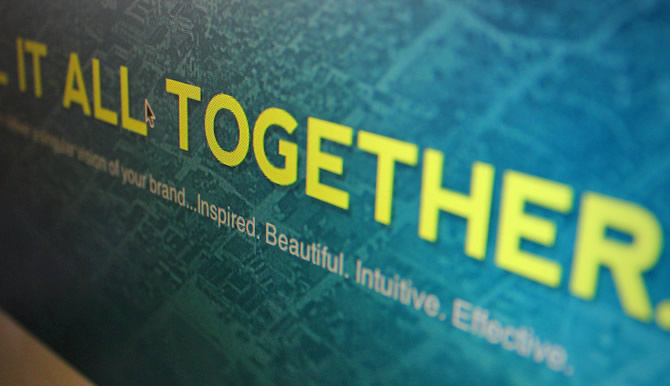 AIRSHP is officially off the ground!  Many a-blood, sweat, and tears were shed in the process, but here we are.. finally able to show off our work to the world.. The goal was to create a website that showcased our collective talents in an intuitive and fresh interface that ‘gets out of the way’ and lets the work speak for itself..  we’ll post more on the details of the making-of process later – but for now, its time for us to rest and time for you to explore our work.  Feel free to sign up for our email newsletter and please do contact us if you are interested in chartering the AIRSHP for a project or three !

If you’re wondering, right now you are in the ‘LABS’ section of our website – which is more or less our blog – a place to post news, ramblings, links to cool stuff, and experimental projects that keep our creative fires burning ..